This is the first of two parts of my ultra marathon journey in the recent Penang 100, an inaugural event held in the beautiful island of Penang. I managed to complete the race in 14 hours and 45 minutes and it was my 8th 100km ultra marathon to date.

Here is the first part of the story...


For a distance runner like me, who would not jump into the opportunity to run around the Penang Island, one of the beautiful and most recognizable places in Malaysia? So, when Penang 100 Ultramarathon race was announced, nothing could hold me back than signing up for the event. Knowing the capability of the Race Director, who is an ultramarathoner himself, and that the race is backed by the State Government, I knew it will be a successful event. While the 84km Round the Penang Island category was already sexy enough for me to sign up, the chance for me to scale up Bukit Bendera (or Penang Hill) for additional 16km was even more sexier and attractive. So, I decided to sign up for the 100km Challenge category. The 100km category was really making a big hit among runners in Malaysia as the category was quickly filled up, as compared to the other two categories, which had the organizer expanded the quota to cater the demand.

While traveling alone to marathon and ultramarathon races have never been a problem to me, going with other like-minded friends would always be more awesome. Once I’ve done with my registration, it was time to lure some other close friends to register, and that includes Khairul, already having multiple marathons under his belt but never did an ultramarathon race of any distance. He was skeptical at first about signing up for the race but I assured him that we will train and prepare together. And that was what we did, especially in the final two months prior to Penang 100, which I had blogged earlier here.

Approaching the day with heightened anticipation and nervousness, I was lucky to get some tips and insights on what to expect from another friend who did a similar round-the-island event, which was the 84km Starlight, held few weeks earlier than Penang 100. But I still couldn’t get information how to handle the Bukit Bendera section and how tough it would be. The only information that I could gather was that it would be a 700m+ hike over some 5km distance. So it would be a steep uphill which could be torturous especially after you’ve been moving on your foot for 80km+ in more than 10 hours or so. Going steep on uphill also means going steep on downhill which if you’re not careful enough, could cause joint pains as well as aggravate muscular cramps, or may even cause your toenails to peel off. So, Bukit Bendera section kept me worried until I actually faced it off on the race day. And apart from it, I was worried on how I would cope with the night race – having to stay awake during my usual sleeping hours, as the race would start at 9pm and finish the next day at 3pm (for the 18-hour cutoff).

Just by studying the elevation profile from the race official website, I don’t think it gives a justice on how tough the overall route is. From the elevation profile, there were three uphill sections that you must deal with including the Bukit Bendera section, where the other two are the elevated Lebuhraya Gelugor that takes you from Teluk Kumbar to Kg. Genting in Balik Pulau (max elevation of 104m) and the other one just after the 50km CP that takes you from Balik Pulau to Teluk Bahang (max elevation of 219m). Of course, these two sections were dwarfed by Bukit Bendera section which has the max elevation of 703m. And besides these three elevated sections that we had to deal with, there were other smaller rolling sections littered throughout the race route. Although there were just a little climbs, they were enough to give a cry to the already sore muscles. While going uphill would be rewarded by the downhill sections where you could use the momentum to run, running on flat sections were not any easier as we need to continue moving the legs to get ourselves moving. And there were a lot of flat sections throughout the whole route, as well, especially the long, dreaded section between CP2 an CP3 around Damar Laut or Teluk Kumbar area where we passed two Muslim cemetery sites. 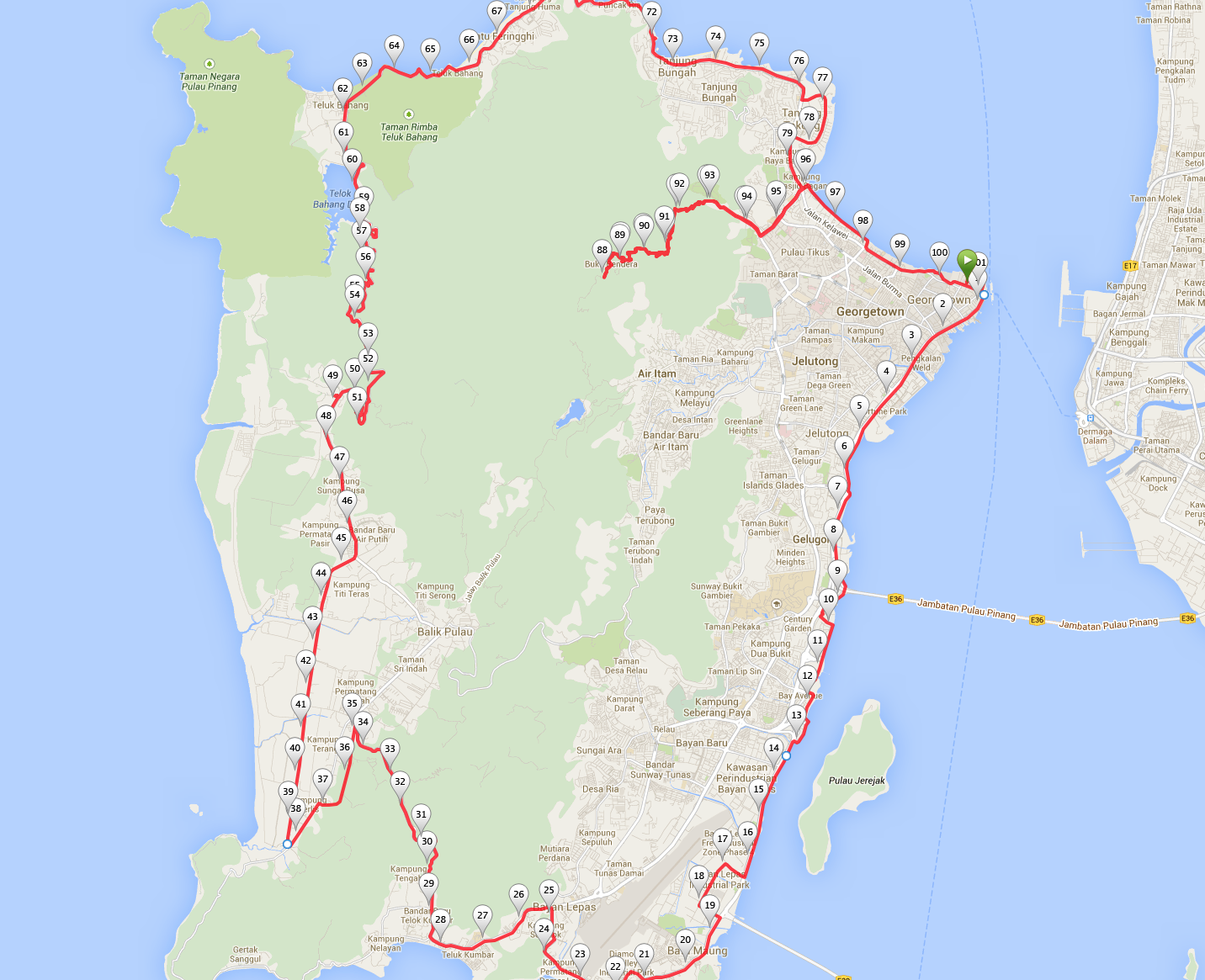 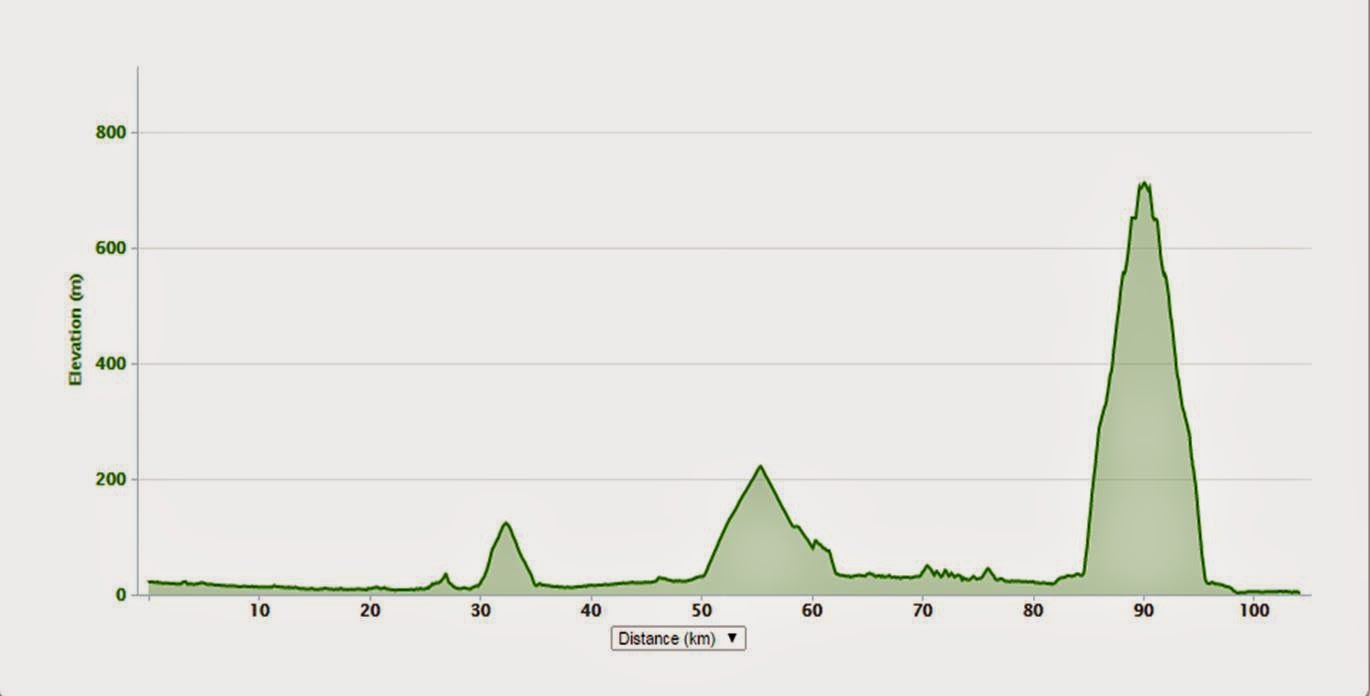 and the route elevation profile

My entourage arrived in Penang by flight on Saturday morning, and right away we treated ourselves with the sumptuous foods of Penang – the curry, nasi briyani, ayam tandoori, which were abundant around where we stayed at Jalan Masjid Kapitan Keling, just less than a kilometer away from the race start/finish and race pack collection venue at the Esplanade (or Padang Kota Lama). As it was still early to check in at the Red Inn Court (a nice, affordable, clean, spacious hostel-like accommodation), we went ahead with the race pack collection and soon met with many other familiar runners there. There were a few of them that I haven’t seen for a while so there were a lot of things to catch up. Sponsors paraded their booths with merchandise from energy gel to gears and there was also a booth by the newly-formed Malaysian Ultra Runners Association (MURA) whose President is non-other than Mr. Ng Seow Kong, Malaysian most recognizable and most accomplished ultramarathoner. MURA’s presence there was to promote the association to the running fraternity as well as to drive memberships. 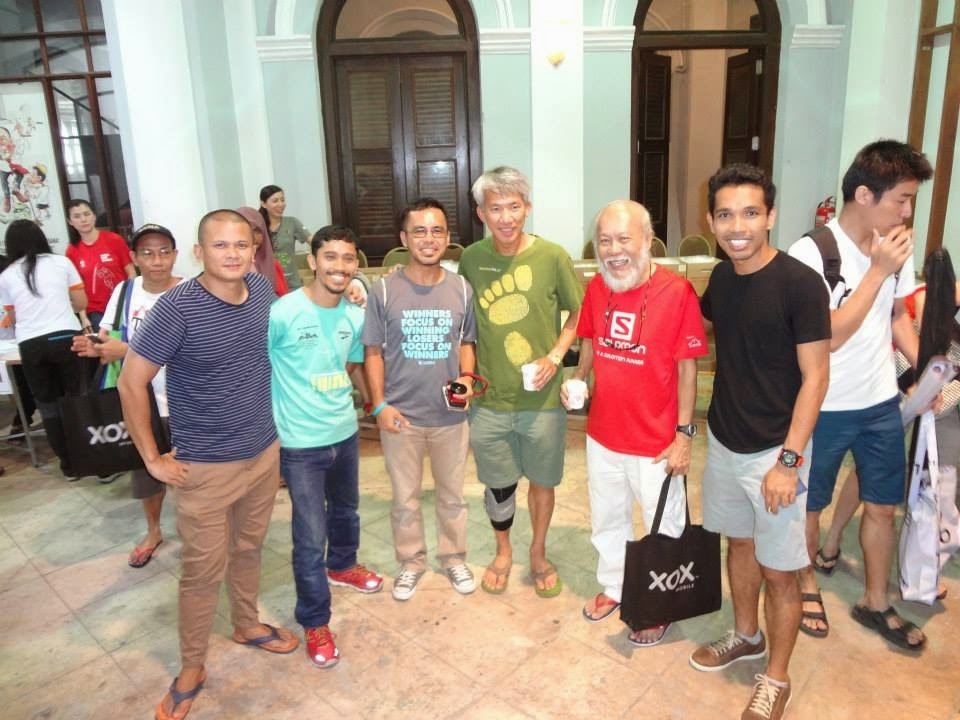 With the President of MURA, Mr. Ng Seow Kong, at the race pack collection site.
[photo by Man Baik]

After lunch, we headed back to Red Inn Court to check in, packing up our stuffs for our battle that night and that the next day, getting some rests before waking up for some light meals before getting ourselves to the race venue. When I was expecting to take a nap for an hour or two, it just didn't happen. And I was tossing left and right on the bed trying to force myself to sleep without success. In the end, it was time for me to be back on my feet and I was just hoping that I would survive the night and that my body would not force me to take a short nap while in the race which could be time costly to me.

So, for the race, I've decided to go with my neon vaporlite 2ndSkin team t-shirt for the first 50km and the black one for the second 50km, Kraftfit short compression bottom, Wrightsock socks (with spare pair at the 50km CP which I didn't use), Team Spyder's Tank H shades which I put in the drop bad and used only after I exited from Bukit Bendera park (as the weather stayed overcast with a little sunshine), Ultimate Direction's Anton Krupicka hydration vest with two 600ml bottles, Garmin 910XT that I recharged for 5-minutes midway of the race to ensure the power lasts until the end of the race, Petzl Tikka RXP headlamp and the reliable Skechers GOrun Ultra Nite Owl, which also helped me to finish the Beaufort 100km race in June.

For my nutrition, I brought eight sachets of Hammer gel, four sachets for each 50km, of which I eventually consumed three in the first 50km and only one in the second 50km, two tubs of Hammer perpetuem solids, which I only consumed two capsules throughout the race, two tubs of Hammer Endurolyte Fizz which I religiously put into my water bottle everytime I refill them and few caps of Hammer anti-fatigue tablets. The main reason why I didn't consume much gels and solids was because of the sufficient foods at each check points where the organizer provided bananas, dates (which I think was really helpful), and solid meals in form of porridge at the 50km CP. 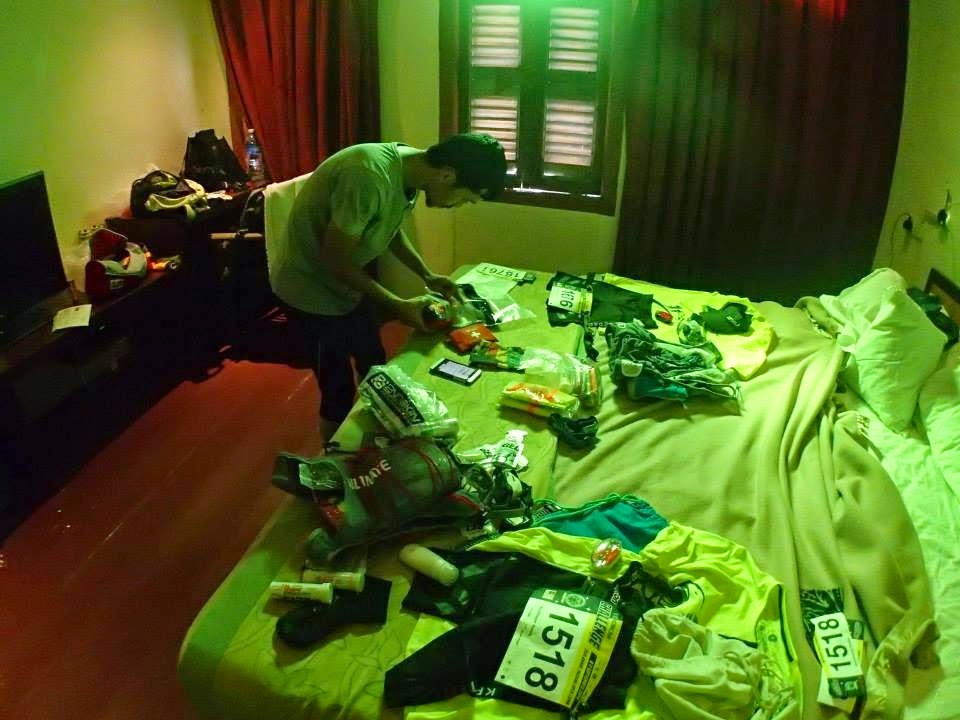 Khairul packing up his stuff for his maiden ultra marathon race later that night.

We made ourselves to the race venue around 7.50pm. Did what was required – putting the drop bags into the lorry that will transport them to the 50km CP and went through the mandatory check on mandatory items, before it was time for the customary photo sessions with other runners as well as exchanging well wishes. I reckoned that there were some 600-700 runners from both 84km and 100km categories. The Chief Minister was there to flag off the participants and slightly after 9pm, the runners were flagged off. The 50km runners will be flagged off later somewhere along the route (at the CP3 if I'm not mistaken). I was in joyous mood, haven’t done 100km race since the last one in Beaufort in June. For this race, as there were cut-off time for every CP, I’ve prepared a pace note to help me with my pace. The note comes complete with the cutoff time set by the organizer at each water station and my target time of arrival. And I had two sets of targets – one is the fast target which is to complete the race under 15 hours and the other one is the slow one, to complete under 17 hours and 30 minutes. I held on to the notes tightly throughout the race and it has proven very useful as I managed to get to every checkpoint as per my target. Wherever and whenever I fell behind the target (especially when I had to slow down to overcome the hilly sections), I would cover it up by going a little faster on downhill or flat sections. 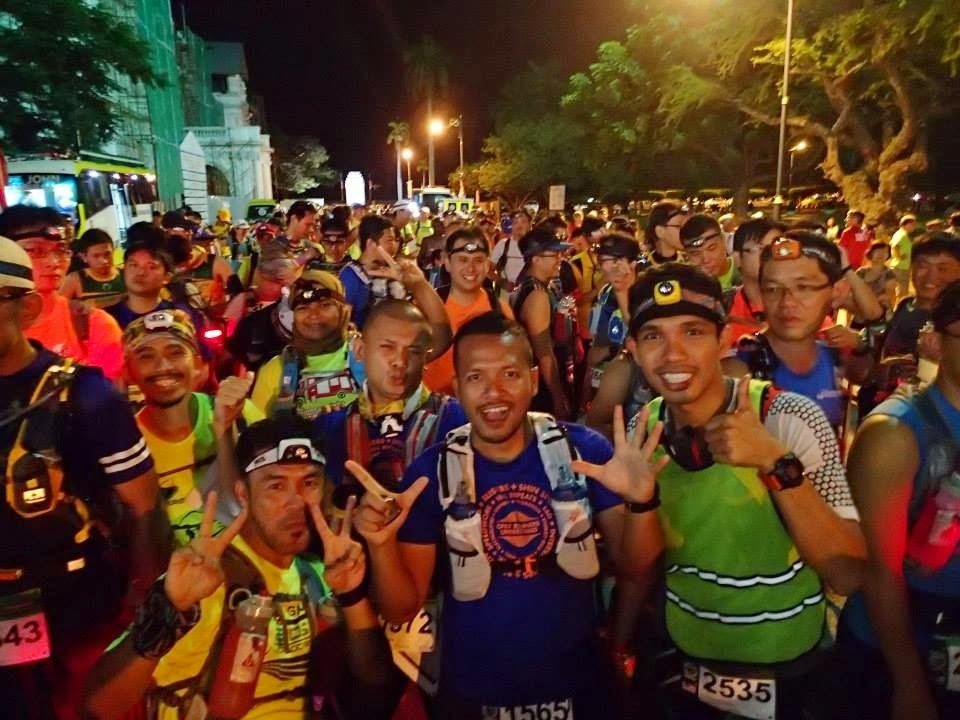 Not underestimating the challenge ahead but everyone was in joyous mood at the start line that night.